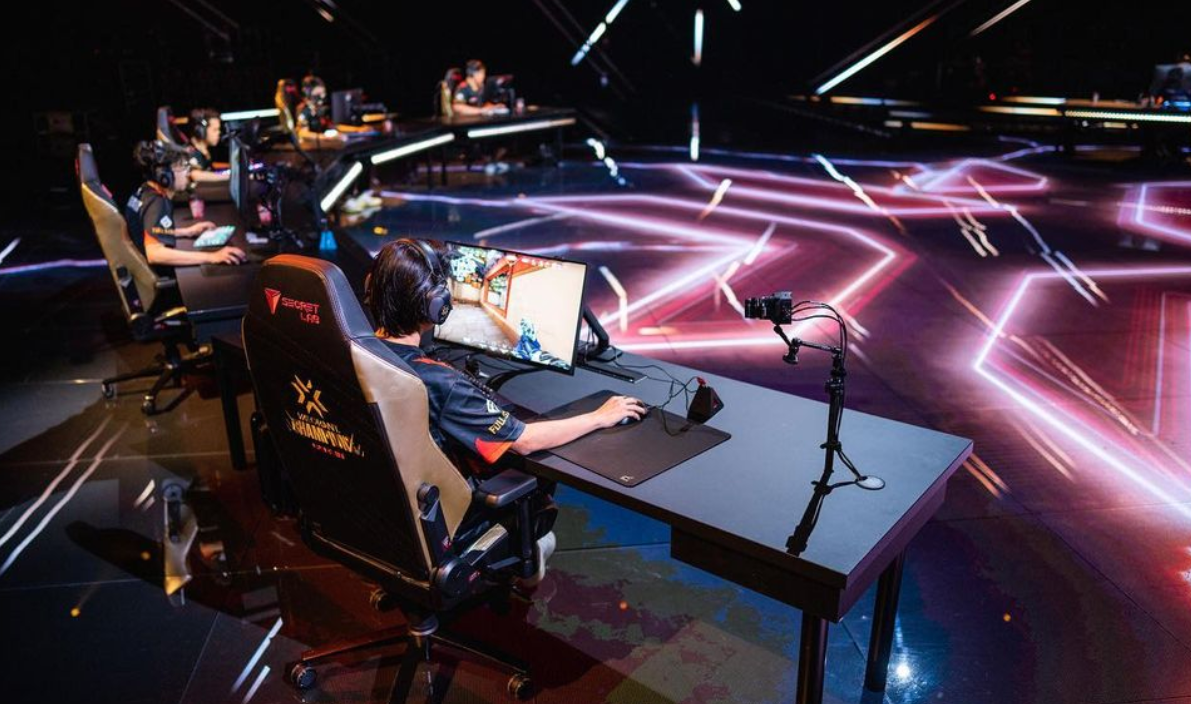 A black hall with elaborate LED lighting and an LED floor with international stars sitting around in a circle and with ultimate concenration: the setting could be a film shoot because the hall is the Marlene Dietrich Halle, one of the most historic and largest sound stagesin Europe. Film classics such as “The Blue Angel” and “Metropolis” had been shot on the lot of Studio Babelsberg in the past. And it was only recently that the cast and crew of “The Matrix Resurrections” had been here . But the place where film-makers are usually working day and night in closed sets on new productions then played host to the stars from a completely different sector last December: the best international gamers – and with them one of the year’s most important eSports events, the finals of the Valorant Champion Tour (VCT).

Valorant is one of the most popular games in the “free-to-play multiplayer first-person shooter” genre, which was developed by Riot Games and has been on the market since 2020. There are local league formats, but the VCT is a year-long competition held in several countries where the best of the best can compete worldwide. The staging of the event is always settingnew standards. Riot Games’ self-declared aim is to provide a high entertainment value for players and fans and thus to make eSports even bigger and better.

The success of eSports events has exploded in recent years. Audiences often number 100,000 or more spectators. In just the past two years of lockdown, the user numbers have soared due to other events being cancelled as the industry quickly switched to online events. In global terms, turnover from the eSports industry was 947 million US Dollars in 2020. By 2024, market research forecasts a market volume of around 1.6 billion Euros.

The VCT was originally supposed to take place in front of a live audience, but, due to pandemic-related restrictions and thanks to ideal conditions offered by the studios, Riot Games opted for the intensive studio atmosphere in Babelsberg. After numerous preliminary rounds throughout the year, the 16 international teams came together in Potsdam and Berlin for the finals in December. The event was broadcast live on the Internet. A large technical team supported by the operators of Studio Babelsberg ensured that the final did not lose any of its spectator experience.

Talks had already been held with the studios back last summer. “We are normally focused on film productions and are often booked up for several months. But if we have capacity free, then we are also happy to take on eSports events or talk show formats. When the decision was made to come to Babelsberg, we massively increased the infrastructure,” says Eike Wolf, Director of Studio Operations and a Member of the Management Board. Half of the street in front of the studio was closed off for a short time and a 2×10 gigabit fibre-optic line laid to guarantee smooth transmission of the high data volume. The white studio walls of the Marlene Dietrich Halle, which were covered with layers of patina and splashes of artificial blood from the last Tarantino shoot, disappeared under black paint. Every ladder, heating pipe and screw was painted over in black to create the setting for the game event.

The production company Concom, which specialises in sporting events on the scale of the US Open Series or the Red Bull Air Races, worked behind the scenes together with Riot Games and the Studio Babelsberg team. Months before the event, preparations kicked in and arrangements were being made with calls and emails from all over the world, including Amsterdam, Dublin, Dubai and Los Angeles. This was also a challenge for the infrastructure of the studio team which is normally geared to working on long shoots rather than short-term and simultaneously global events. A dedicated production office was created on the studio lot for this period. “They set up their own headquarters here for the three weeks of the Valorant Championship Tour’s broadcast, with offices on two floors to look after the smooth transmission of the streaming and the show’s production,” says Eike Wolf. The players and everyone involved went into quarantine beforehand and the elaborate on-set production was also accompanied by extensive Coronavirus tests.The finals of the VCT 2021 as a streaming event didn’t lose any of their appeal in the film studio’s atmospherically lit sound stage. The tension and hours of concentration by the Valorant teams frequently mixed with euphoria and excitement at mastering the challenges. Two exciting weeks later, it was clear who the winning team was: “Acend” won the last match just ahead of “Gambit”.

While the film cameras are now already to roll again in Babelsberg for the next film production, the team of Riot Games is right in the middle of cranking up the global season for VCT 2022. And another phase of eSports has also been ushered in. An official regional league for the German-speaking region was established this year with the launching of “VRL DACH: Evolution”.