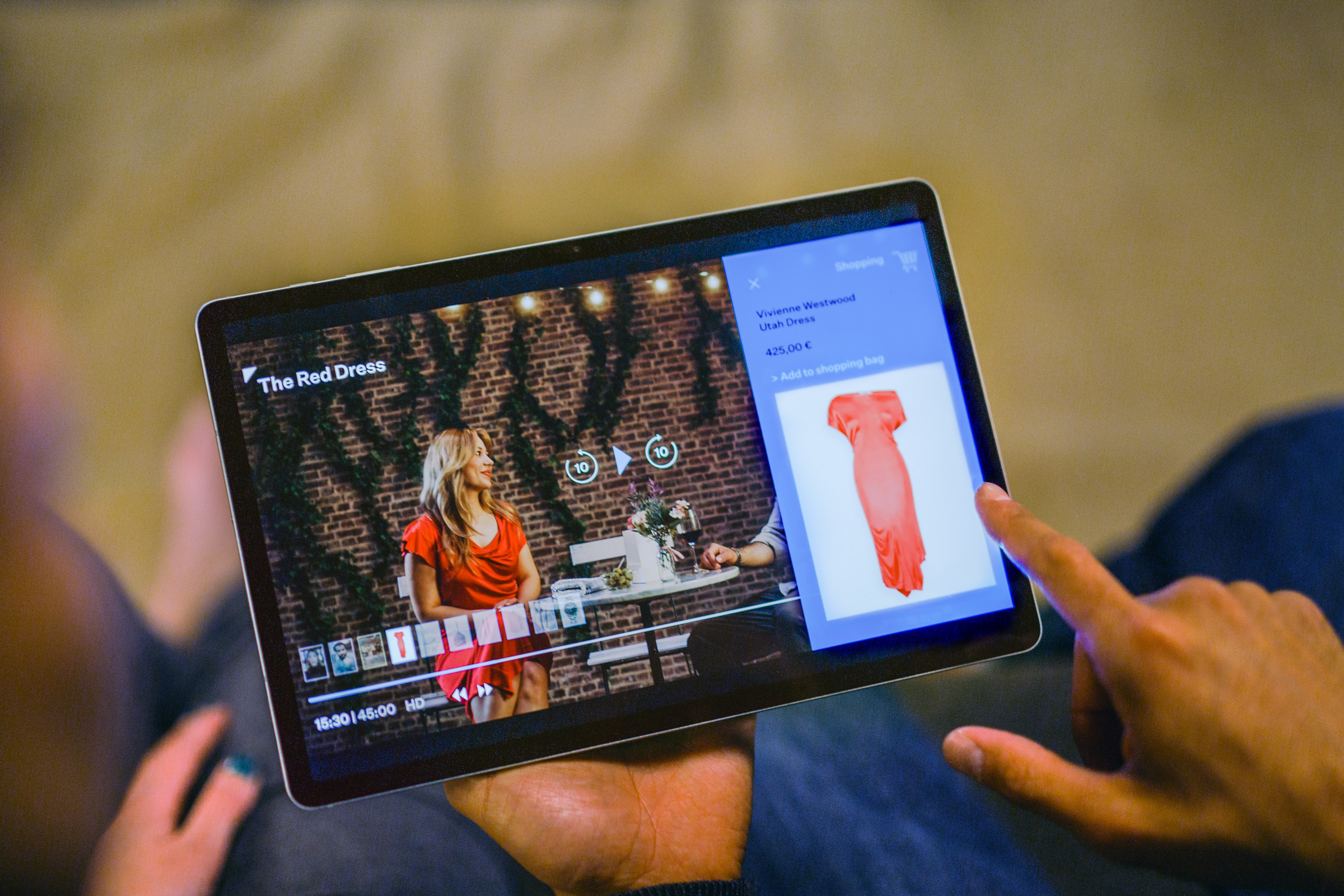 Sometimes you spot a pair of sneakers in a scene, that pretty red dress the actress is wearing, or a piece of furniture you’d like to buy later on. Or you wonder where those impressive cliffs by the coast are that one can always see in the background. And what was the name of the actor again who’s playing the supporting role in this film?

The production of films, series and documentaries also generates a lot of information about film locations, protagonists, costumes and props that has hardly been exploited and displayed until now. If you’re looking for a red dress, you google and shimmy through shopping platforms using the typical search words. You can use the second screen of your mobile phone to look up the actors on Wikipedia and IMDb, but you won’t find any additional information about the shooting locations. However, all of this data exists, it’s gathered together for the production of a film – but then it goes to waste because there isn’t any central, digital tool to store it.

One tech solution for all film data

The Potsdam-based company transfermedia has now launched jay, a metadata technology offering film production companies and distributors an automated solution for collecting and making data available. Whether it’s data about film locations, props, actors or costumes: everything is linked and stored on a scene-by-scene basis thanks to metadata software. The audience no longer has to use a second screen to access the information because everything can now appear in the film – and integrated in-stream shopping means that they can even buy the displayed products directly.

Customers of streaming services know a part of the principle from Amazon X-Ray where you can access information about the actors who are currently acting in a particular scene so that it appears on the edge of the screen. However, this is the result of an elaborate process where scenes are divided manually and the information about the protagonists is subsequently added. In addition, Amazon only offers information about the cast or the soundtrack. jay, though, makes it possible for the first time to have all of a film’s metadata gathered during production – and to do this as part of an automated workflow. Distributors then receive the film directly with the linked data.

New business models consequently open up for broadcasters and video-on-demand platforms with such services as infotainment and in-stream shopping. “One of the biggest challenges is to help initiate the change and show what possibilities we have,” says Irmela Wrogemann, who speaks with broadcasters in her role as Chief Marketing Officer (CMO) at transfermedia. “This is very much in the direction of change management, i.e. how to think, plan and play out content in the future. And it’s also about opening up structures. Editorial, production, distribution and technology have few interfaces in the world of broadcasting. But we could benefit a lot if we were to work together in a more joined up way. And ultimately offer the audience a better content experience.”

transfermedia has been researching in the field of metadata for a long time. The team headed up by Peter Effenberg draws on many years of experience in film production, technical expertise and intensive research on metadata.

We know the principle of shoppable content from social media. jay is now making in-stream shopping possible for the film industry as well. This is of benefit to the streaming market because services like Netflix, Disney and Co. are looking for new business models. Subscription numbers are starting to fall and the principle of constantly producing new content is reaching its limits. Some providers are already thinking about introducing advertising as a way of generating new sources of income. This is where jay comes in with the possibility of in-stream shopping. Product placement as regularly seen in major blockbusters from James Bond to Spider Man works in a similar way – but in-stream shopping is much more accessible, direct and measurable. The viewers don’t have to research the manufacturer or brand after watching the film; instead of that, they can have the right product offered to them in a direct way with just one click whilst they are streaming. The basis for this is digital metadata collected by jay during production. We will probably soon see new professions appearing on film sets to gather the data, and a data wrangler may then become part of the standard line-up in a film crew. Because it’s worth bringing all of the data together from the screenplay or script continuity as part of the ongoing process. Data recognition by artificial intelligence isn’t currently an option and won’t be the case in the near future either. A red dress, for example, is easy to mix up, and the algorithm here is still overstretched and prone to error.

jay not only facilitates the central operation and storage of data – it also analyses and verifies it by using the DataQuality feature to adapt the information to the distributors’ standards. It is then the responsibility of the broadcasters and streaming services to integrate the data correctly into the respective platform. jay supports them in an advisory capacity in the implementation and is currently conducting user research to have a better understanding of the viewers’ needs: what additional information are they particularly interested in? How do they want to interact with the data? And what is important to them in terms of design?

The change in thinking by the broadcasters is not the only issue; transfermedia has also encountered reservations about a possible sellout of a film. A criticism that is understandable, says Wrogemann. In-stream shopping does not suit every format. It is not suitable for arthouse films, but it could work, for example, for romantic comedies or series where merchandising plays a role. Moreover, infotainment is now just as much a possibility as shopping. jay has already realised a first use case with the rbb docu-drama “Kennedy’s Love for Europe”. Thanks to the new content level, the viewers can access further information about the actors, historical events and locations directly in the player. rbb is thus the first German broadcaster to undertake this kind of in-stream interaction.

Distributors such as broadcasters and VoD platforms as well as producers are jay’s key target groups along with the viewers as end users. While jay’s technology opens up new levels of content for the audience, the B2B target group can generate sources of income through in-stream shopping, with film productions able to tap into a wider range of financing sources further upstream. The first major use case for in-stream shopping is now being planned by jay with a broadcaster for next year.