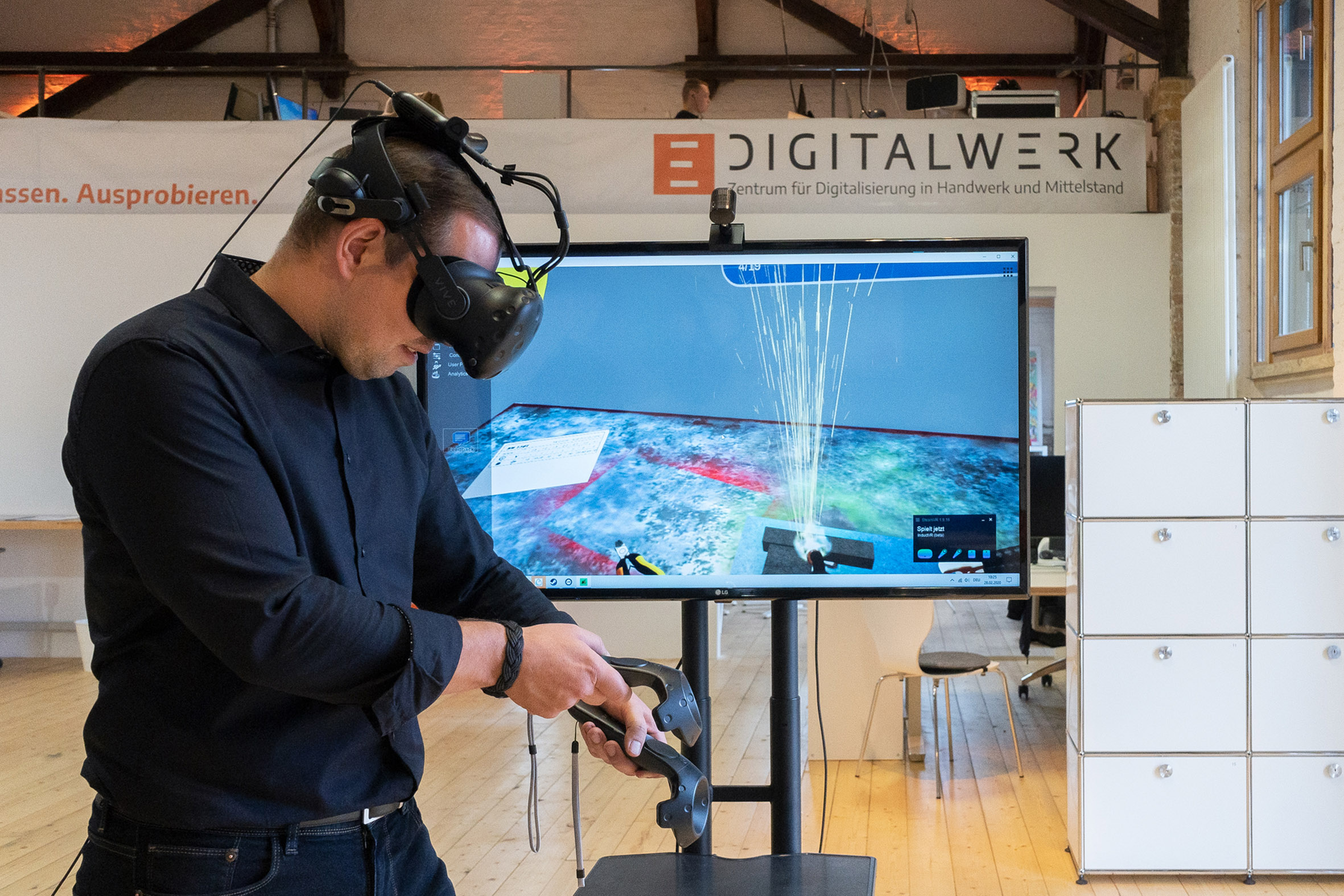 Can the handling of a welding machine be trained digitally? Could you yourself produce spare parts or prototypes in small quantities? And can a digital software for booking appointments reduce the workload for employees who, for example, are answering phone calls and coordinating requests for appointments in hairdressing salons? The Digitalwerk in Werder shows craft enterprises and representatives of small and medium-sized businesses the kind of digital technologies which will be available to them in the future.

Digital applications such as “Learning to weld with Virtual Reality”, 3D printing, workforce planning software or digital cash register systems can be tried out for free at several interactive stations on site. The project – supported by funding from the European Union and the state of Brandenburg – was launched in 2019 with a focus on craft businesses and, following an extension of the funding period, is now also taking a closer look at such sectors as culture, tourism or stationary retail.

The interactive stations are the Digitalwerk’s core offer. In addition, events, workshops and training courses are organised in order to present the sensible and efficient integration of digital processes into everyday working life. This can involve more complex solutions with hardware, such as those required for a 3D printer, as well as a digitalised workforce planning system which enables a craft business to coordinate its orders efficiently.

“We offer entry-level formats. Not everyone has a smartphone to hand on a daily basis or knows anything about VR glasses. We also need to show a master painter who has been running the business for 30 years what digital solutions might available for him,” says Alexander Skambath who coordinates the services for the craft sector and manages press and PR. “We are accessible online for everybody – in other words, our offer covers the whole of Brandenburg.”

A lot of research may have been done in the field of Augmented Reality (AR) and Virtual Reality (VR) at universities and in the field of science, but hardly any valid data has been collected to date in businesses to show whether and how useful its deployment is. This is where there seems to be a gap in the research. Independently of Digitalwerk, Jan Wagener, who has since become responsible for development and programming as a project manager at the company, had investigated this as part of his studies in Computer Science and presented the findings in his master’s thesis on the “Development and Evaluation of an Augmented Reality (AR) Application to Support Learning Processes in the Workplace Environment”.

Although AR and VR are already used in large industries – and are even on the ISS space station where remote maintenance is undertaken using HoloLenses -, the possible applications in small and medium-sized enterprises have rarely ever been the subject of scientific research, according to Jan Wagener. Yet many examples of concrete application are conceivable. Complex machines regularly have to be set up or maintained in companies as well as in the field. For example, a coffee machine manufacturer, whose technicians are servicing different machines, can support and train employees with AR instructions by having them follow the repair instructions using AR glasses. Anyone who is then stuck with a problem out in the field can request help via a remote video link.

So, will Augmented Reality and Virtual Reality really help to strengthen learning processes and guide employees in the future? Can operational procedures be mastered and core processes improved? In order to create a scientific basis for this, Wagener had 14 test persons construct an automatic dispensing system as part of a practical exercise. The dispensing system consisted of components that were complex, but not too complex. The filling of the glass was controlled by electronics. A glass sensor measured when the glass was full. According to the instructions, various cables had to be connected with one another or, say, object A with object F. The assembly was a challenge for the inexperienced and unskilled test persons. They included trainees, students, office workers and project managers aged between 35 and 56, with different educational backgrounds – all with little experience of AR. The participants were divided into two groups: one half followed each step in classic printed instructions, the other half was guided by using Augmented Reality. The instructions appeared with text and arrows in their AR glasses (Microsoft HoloLens 2). Microsoft Dynamics 365 was the software used by Wagener here.

The evaluation showed the results coming out in favour of using AR. There was a better rating for the concepts developed for the instructions using AR, and the test persons also said that they learned significantly more. An improvement in performance was clearly achieved in the test environment. AR could thus prove helpful in supporting operational processes as well as in-company training. The new AR/VR glasses and software coming onto the market in the near future can help small and medium-sized enterprises to become even more familiar with the many possibilities offered to them by AR.

In the meantime, you can test new interactive stations at Digitalwerk, visit workshops or explore the whole range of services on offer in a relaxed atmosphere at the Open Day on 13 January: https://digital-werk.org/neue-workshops-im-januar/