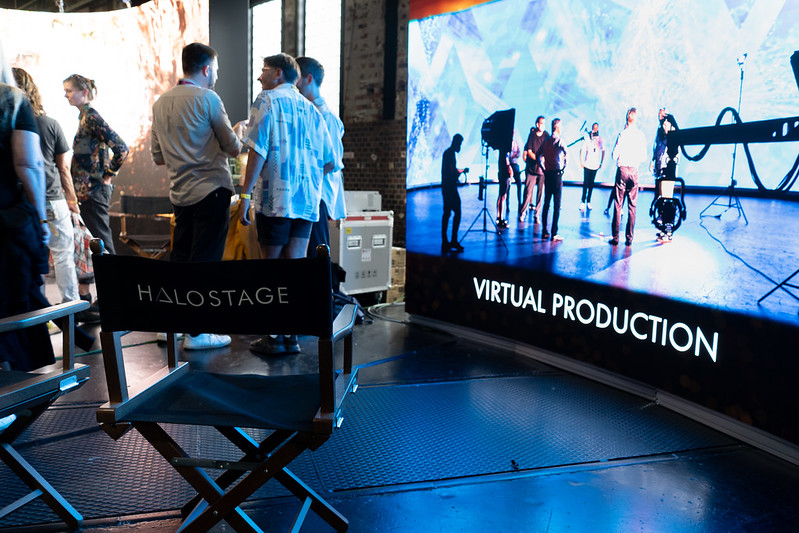 “Anywhere the wind blows” is sung by Freddy Mercury at the end of Bohemian Rhapsody – and this line in the song served as the motto for the re:publica digital conference when it was held again after a two-year break due to the pandemic. The four-day event at the beginning of June attracted 25,000 visitors, and included 400 sessions with 700 speakers. While the light summer wind blew over the outdoor area of Arena Berlin, there were discussions going on in the darkened hall that, very much in keeping with re:publica’s orientation, were not just focussing on purely digital and media technology, but also addressed such socio-political issues as sustainability, climate change and social change. Many representatives from the MediaTech Hub were part of the programme.

In a discussion entitled “Society in Permanent Crisis”, the climate economist Ottmar Edenhofer of the Potsdam Institute for Climate Impact Research served as a sparring partner for the journalist Carolin Emcke to provide the facts as well as the possible courses for action between war, climate crisis and the challenges of our age. Stefan Scheller, one of the leading HR influencers, bloggers and podcast hosts on new work, new management and recruiting shared his experiences about the advantages and disadvantages of working from home and remote working.

The new job opportunities can also make life in the countryside more attractive again for digital talents and contribute to new economic growth outside of the urban conurbations. An approach that is supported by the Economic Development Agency Brandenburg (WFBB). The Agency’s Till Meyer and Steffen Kammradt explained how the state of Brandenburg is transforming itself into a smart country around old manor houses, railway stations and factory sites. Things got more media-specific with Marcus Pfeil and Michael Anthony from Vertical 52. Their start-up is bringing data from space back to earth in short stories: where can one find bridges in danger of collapsing in Germany? Where is illegal mining taking place in India? How much of the land is in flames in the Amazon region at the moment? Their platform for analysing satellite and radar data supports NGOs and journalists in their work.

Anna Franziska Michel from the MediaTech Hub Accelerator start-up yoona.ai spoke in her presentation “The Metaverse SaaS Solution” about the pioneering role that the digital fashion industry can play in the field of sustainable lifestyles. As the CEO of yoona.ai, she is driving the development of AI-based design forward. Laura Hirvi, Managing Director of the VRBB served as the host for the “Women in XR and Allies Panel”, which brought leading women from the XR industry together to discuss trends and developments. How important the aspects of a uniform European regulatory framework for large digital platforms can be was highlighted by Dr Eva Flecken, Director of the Medienanstalt Berlin-Brandenburg (mabb), as one of the panelists in the discussion on “Digital Art Services – Are We Now Going To Have the Platform Constitution?”.

How is virtual production changing the media hub of Berlin/Brandenburg?

An important technical discussion in the Media programme strand funded by Medienboard Berlin-Brandenburg and supported by mabb, shed light on the upheavals that new technology is bringing to the film industry by asking such questions as “Where will we be shooting in 10 years?”, “What does that mean for Potsdam-Babelsberg as a production hub?” and “Will we only be shooting virtually in future?”.

Virtual production has become a major issue for filmmakers. Cinematic LED screens, like the one the Potsdam Halostage showed next to Stage 1, will soon become an indispensable part of the world of cinema. The analogue and digital worlds are now already merging during actual production – this doesn’t only change the processes, but also the way we are able to tell stories. Actors as well as the camera or lighting can now interact directly in front of digital backdrops instead of monocolour green screens. A discussion entitled “The Future of Cinema – How is Virtual Production Changing Berlin/Brandenburg as a Media Hub?” saw creative industries consultant Franziska Koch, Erik Wolff, (CEO of Halostage), Wolf Bosse (Co Founder of Reactionlink SE Technologies GmbH) and VFK producer Scherin Rajakumaran outlining their very own particular experiences.

“Everything always changes in post-production”.

But the technology isn’t that new, Sherin Rajakumaran suggested. Whether it’s painted screens or green screens, cinema has always managed to create entire worlds in the studio without the film crew having to travel to a particular location. What is new is that the previously known production processes are changing. This has an impact on budgets and work processes. Production-related delays, such as those that might occur in rendering, are eliminated. And, as Wolf Bosse noted, typically downstream processes are now brought forward in the production cycle. Taken altogether, this changes the dynamics of filmmaking right through to the different versions of the screenplay. Authors can make allowances for the new technical possibilities in their storylines. It is then much easier to rewrite plots during filming because the shooting locations don’t then have to be changed at great expense.

What doesn’t change are entertaining stories, Wolff adds. The rest of the discussion is a technical one. Is a VFX shot worth considering at a particular point or is 3D content more appropriate? Such conversations have to be held at an early stage, with the discussions always revolving around production costs and the creative aspect.

The fundamental nature of filmmaking will therefore not have changed in ten years’ time, but new technical possibilities will have appeared. Complex technologies that were too slow before will now be easier to use. More artificial intelligence is creeping into the processes, according to Bosse. In addition, there is a better quality of presentation, which is also reflected in the photo-realistic representation of the actors’ facial expressions and gestures. The actors won’t be replaced in the future, but the additional extras can be created more easily using digital tools. According to the hypothesis, the hybrid forms of real-life images supplemented by digital aids are increasing.

Event technology, games industry and film industry benefit from one another

The film industry is not the only field involved in new developments. A large-scale LED screen like the Halostage with highly professional LEDs covering a total area of 1,000 square metres was originally developed for event technology and trade fairs. Moreover, there are developments from the gaming industry that can create the image with tracking glasses via Game Engine. According to Bosse, experimentation involving different media technologies together will develop even further. The film industry is not the only driving force here.

Apart from time savings, there will also be lower costs in future. For example, there will be less need for costly road closures for shoots or the associated shooting permits. As an example, Wolff cites a shoot in Berlin’s Tiergarten tunnel. Scenes in the tunnel were filmed in advance and the remaining ones done in the studio. Classic “car shots”, the like one often sees in the Tatort crime series, are also consequently less expensive. This makes the shoots safer, sometimes more efficient, and one can have better control of other elements such as unwanted reflections on cars or weather conditions.

“None of us are opponents of live-action shoots,” Bosse stresses. “We marry the beauty of the live-action shoot with technical safety”. However, all of this has to be well planned in advance. Virtual production has an impact on direct production as well as on the professional crafts in the industry, and the training programmes keep changing. In the future, for example, there will be more designers of immersive content.

The Potsdam team presented the mobile version of the Halostage LED studio right next to the main stage during the re:publica event. Visitors were able to have a go at filming themselves in front of a digital background.