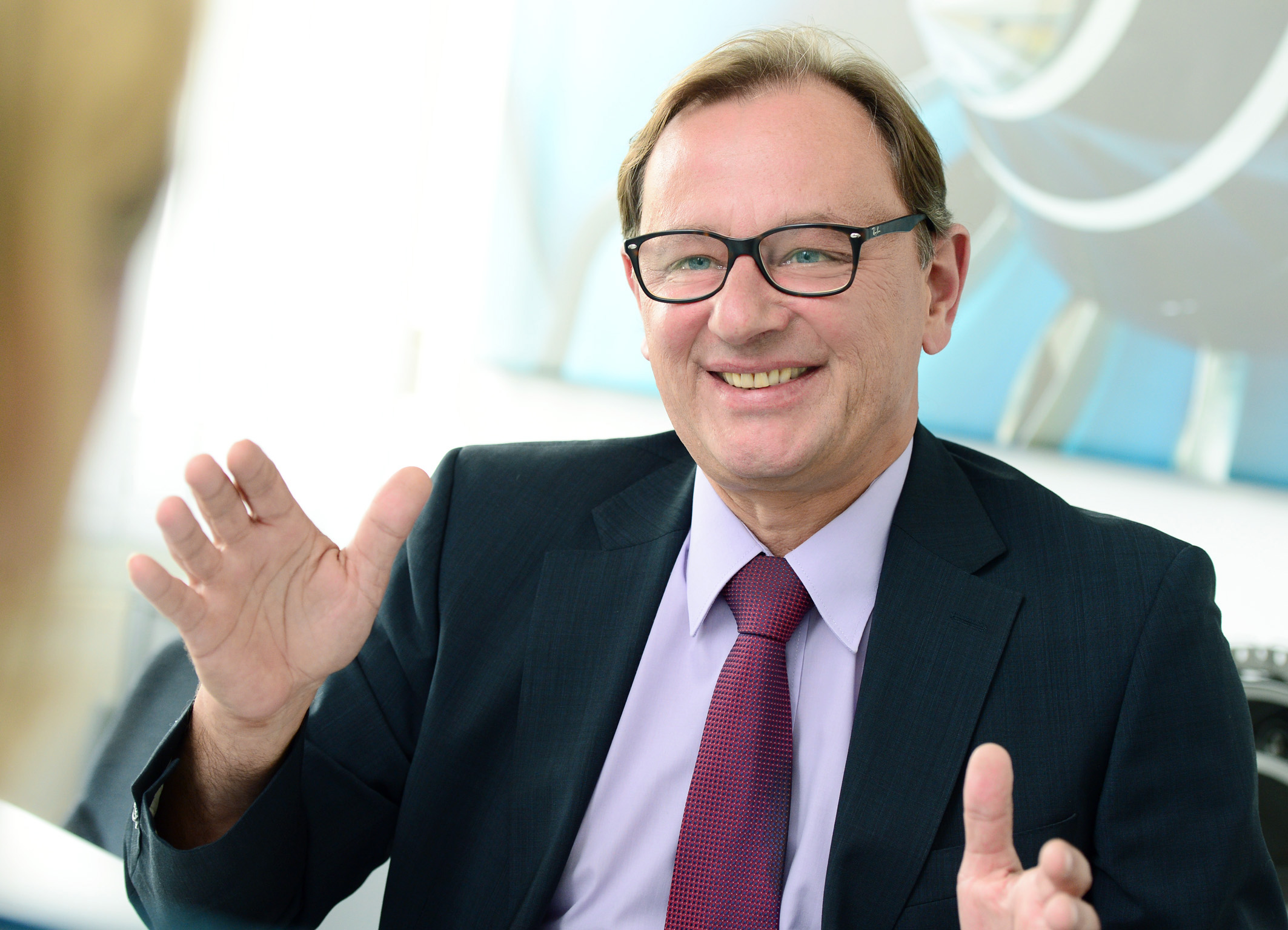 Professor Dr. Marius Swoboda, Head of Design Systems Engineering at Rolls-Royce, talks about his work – The British company Rolls-Royce is developing the aircraft engines of the future in Dahlewitz: virtual reality has long since become reality in aviation. We spoke with Prof. Swoboda about 1:1 , engine health monitoring, safety requirements, and potholes.

Visualisation technologies in aviation: how far are we, where are we heading, Professor Swoboda?

In general, visualisation technologies in aviation are constantly increasing and are already being deployed in many areas – from design through marketing to training and services. At Rolls-Royce Deutschland in Dahlewitz, for example, we are operating a 3D Virtual Reality CAVE for the true-to-scale visualisation of engines and their components. This not only allows a 1:1 visualisation of our products, but also a worldwide cooperation with colleagues on the collaborative and optimal design of components. Interest and demand have risen rapidly within the company since the facility was established – the immersive display experience and the practical benefits have been convincing within a short period of time.

Visualisation, robotisation, AI in aircraft production: how large is the “hands-on” share?

I can only speak for our company here. We are currently working, for example, on approaches for the automatic inspection of assembled engine components. The real components are filmed from many perspectives and compared electronically with CAD design data. The software solutions deployed here include many AI approaches.

We are even further in terms of AI service. We are the pioneers of ‘Engine Health Monitoring’ (EHM), i.e. monitoring engines in the air. What began decades ago is now firmly established with our customers and is constantly being developed by us. For example, we are increasingly using AI to monitor the operating data of individual engines and evaluate them together with a type’s entire fleet. What we learn from an engine thus benefits the operation and safety of all engines – not only retrospectively, but also as far as preventive measures are concerned when corresponding trends emerge. We are already recording thousands of parameters for the latest Pearl engine for Bombardier – initially, they were only in the dozens.

Does that replace the pilot?

No – not at all. Our operations centres receive the engine data via satellite. Our engineers track and evaluate them – manually and with the help of AI applications. If measures become necessary, our experts first talk to the operators of the aircraft, and the responsible management in turn talks to the pilots. The final decision for an aircraft in the air is always taken by the captain.

As has just been stated: we can only speak about our field of activity. Engine construction is still largely a manufactory which, on the one hand, has something to do with the extremely high safety and quality requirements and, on the other, with the arising quantities. We are standardising to a considerable extent and are, in part, pursuing a platform strategy that is similar to that of the automotive industry. However, the level of automation is also a matter of the “business case”. Please bear in mind that nowadays approximately 25,000 passenger aircraft are being actively deployed around the world. That is a very small number compared to the number of cars being largely produced automatically. This relation will continue: both Airbus and Boeing delivered around 700 aircraft in 2017. VW sold about 5 million vehicles in the same year.

Take the buzzword of self-flying aircraft: the autopilot of the skies has been around for a long time, it is only now that the technology is slowly arriving down on the ground. Why is the autopilot up in the skies so established and there’s nothing to be “nervous” about, but it’s a different matter when we talk about autonomous driving ?

Once an aircraft is up in the air, pilots are usually rarely confronted with any challenges from the immediate surroundings. On the road, however, an incredible number of changing constraints have to be taken into account for driving dynamics (traffic, potholes, walkers, weather, etc.). Sensor technology and information processing have simply not yet been developed enough to process the necessary amounts of data in the car in real time and convert them into suitable actions. Flight simulators for practising the necessary actions have been available since the 1960s, but the first car driving simulator was only launched on the market around 1985 (Mercedes Benz Marienfelde). This is due, on the one hand, to the fact that the flight mechanics are very good at describing the movement of an airplane and the things usually run very orderly (including takeoff, landing, gusting loads), but, on the other hand, there is simply too much going on with road traffic!

As a British company, you are researching and producing just outside of Berlin – Why? What potential does Brandenburg have now and in the future?

That’s right, we’ve been here for around 25 years and are steadily evolving. Originally, we were a joint venture in Germany between BMW and our English parent company, Rolls-Royce plc. At that time, we were looking for a conveniently located and attractive location with access to qualified specialists. That was the case in Brandenburg. This is a place where we have a very open-minded, committed state government, who has always given us a lot of support, as well as an academically challenging environment with universities of applied sciences such as the BTU Cottbus or the TU Berlin. Ever since the launch, we have succeeded in transferring responsibility