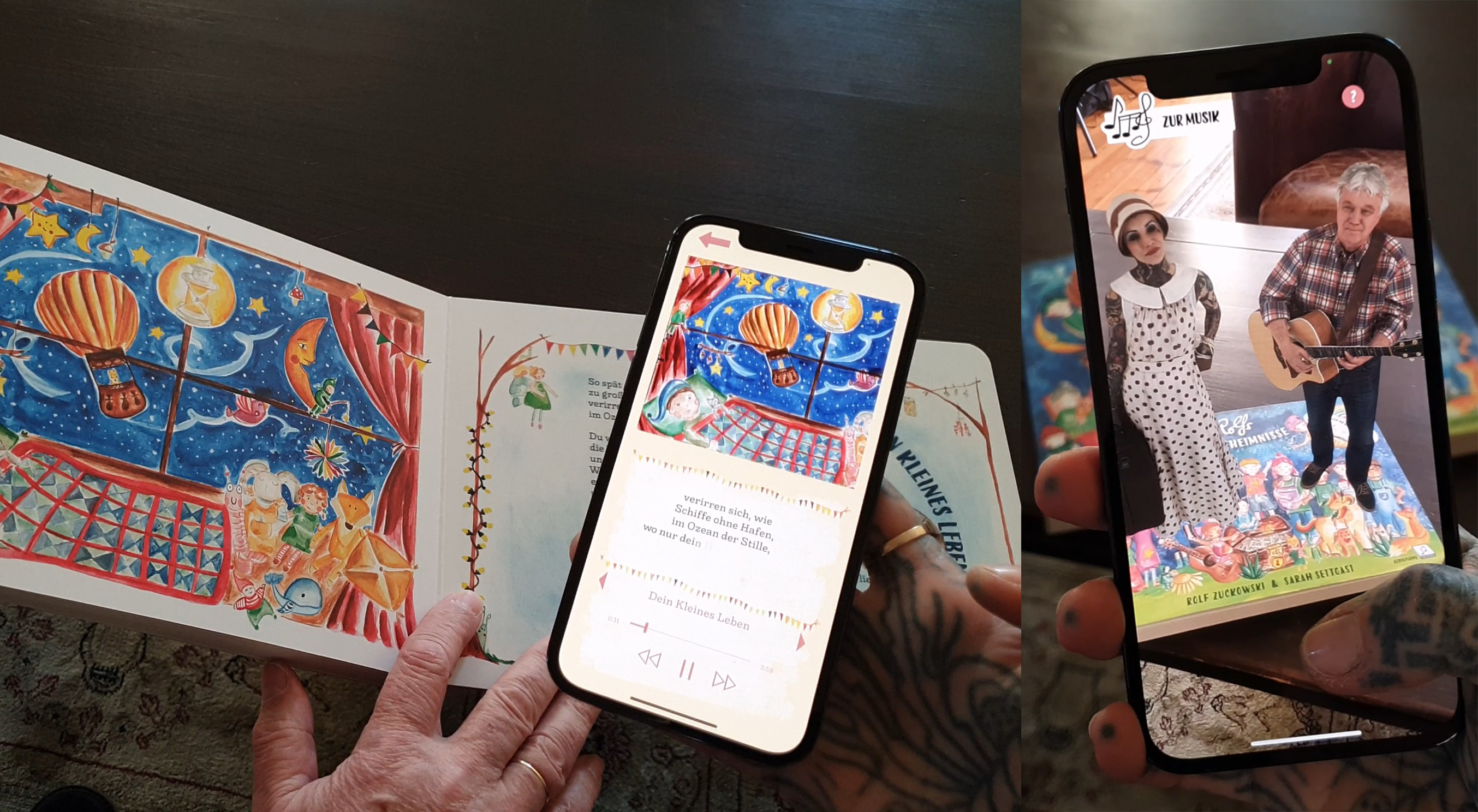 If the audience can’t come to the musician, then the musician just has to come to them: this is exactly what the recently published picture book “Rolfs Liedergeheimnisse” is now making a reality. The colourful design is inspired by the songs of Rolf Zuckowski, the well-known author of children’s songs – but that’s not all: a free Augmented Reality (AR) app brings the musician straight into the living room in the form of a hologram. And the publisher, project initiator and illustrator Sarah Settgast is also there next to him waving from the book’s cover as a miniature 3D figure.

The children’s book with the digital extension was published by Potsdam-based Deutsche Pappebuch Gesellschaft (DPG) which Settgast founded together with her business partner Sven Slazenger. The publishing house stands for haptically high-quality cardboard books made of bite and saliva-resistant materials, ecologically certified and produced in Germany. The team achieves this standard by working with SachsenDruck in Plauen, one of the oldest printing plants in Germany. DPG’s activities range from this collaboration with the long-established company through to the digital future: Volucap in Potsdam-Babelsberg was involved in the production of the app and the development of the holograms. The volumetric studio’s elaborate technology help create lifelike 3D scans which are integrated in Virtual Reality applications and make films into “walk-in” experiences.

However, the project only came about because of Settgast’s enthusiasm for Zuckowski’s songs which generations of children have now come to know for many decades. During the first lockdown last spring, she had regularly followed his “Liedergeschichten aus dem Dachstübchen” on Facebook where the musician sang some songs for entertainment and distraction and then told some little stories around them. A letter followed suggesting a joint collaboration and then a meeting in Hamburg during the summer. Zuckowski was immediately taken by the idea of creating an interactive children’s book based on his lyrics.

A long production period ensued between the original idea and its implementation. While Sarah Settgast worked with watercolours on creating colourful and at times mysterious looking worlds for a total of 12 selected songs, Volucap was occupied in developing the AR app and testing it for various kinds of devices. Zuckowski and Settgast spent a whole day in the Volucap studio having themselves digitally scanned by 32 cameras from every angle for the special highlight of their personal holograms. Viewers can follow the special shoot in a Youtube video. Attention has to be paid to every detail in the large, white Volucap studio. White clothes make the people keep disappearing and even the musician’s guitar was matted so that it didn’t overly shine later on in its digital version. If you now leaf through the finished book, the app automatically recognises the respective page via the photo function and, thanks to a cooperation with Universal Music, plays the song and lyrics for you to sing along with. The pages function like QR codes, so it doesn’t matter whether you are in the middle of the book or want to leaf from back to front. The interaction with the app is deliberately kept streamlined – the combination of haptics, seeing and hearing mean that children can calmly and easily immerse themselves in the world of images. “Sometimes, it doesn’t take much to make a strong impression or convey joy,” Sarah Settgast says. “Here it’s simply about good sound and nice images.” Good sound – that was also important for Zuckowski. The fact that tablets and smartphones can now play his songs in high quality was also one of the decisive factors for the successful cooperation. “Especially given the current situation where people can’t go to concerts and see artists performinh live, this is an opportunity to have a little bit of entertainment at home. Rolf Zuckowski’s songs unite generations,” Settgast says.

“Rolfs Liedergeheimnisse” functions as a picture book with or without the interactive elements. Whether it’s with their parents or older siblings, with or without the accompanying app: many a classic song is waiting to be rediscovered by the readers. The song “Good Morning, Sally!”, which is about a girl in a wheelchair and could now actually be regarded as a song about inclusion, was written about 30 years ago.

The Deutsche Pappebuch Gesellschaft is not only working in the children’s book sector, but also produces the high-quality cardboard books for corporate clients. The corporate publishing products can be used to present the company philosophy or a product catalogue with a special feel. The clients can be addressed in particular via an additional Augmented Reality application. The Deutsche Pappebuch Gesellschaft is currently in talks with the next prominent partners and companies. So watch this space.