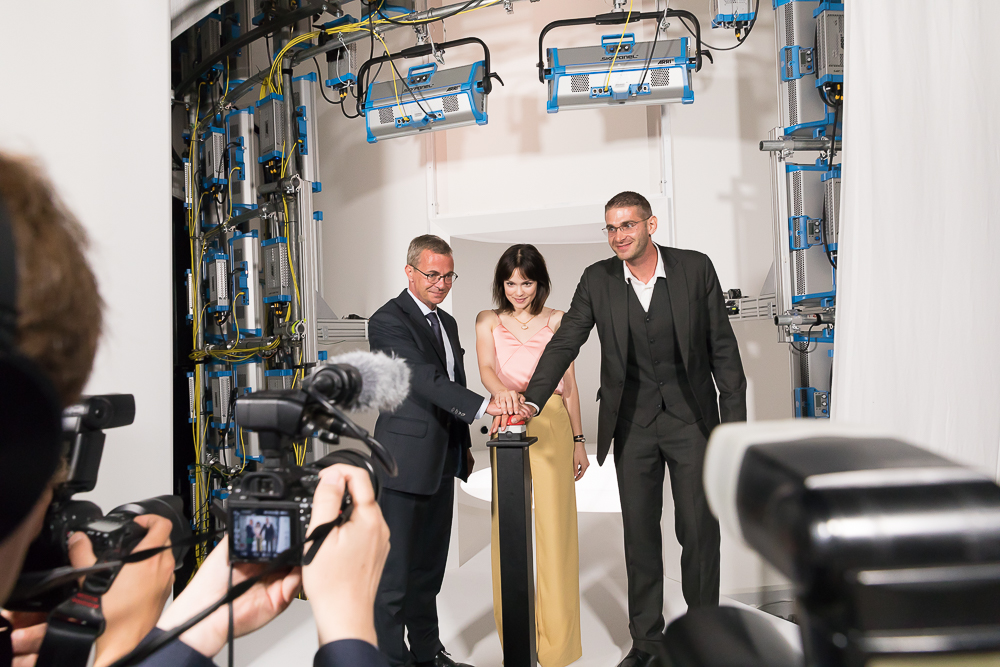 – Actress Emilia Schüle (known from Ku’damm 59, Traumfabrik) was the first person to be recorded in the volumetric studio at the opening

The representatives of the Volucap GmbH operating consortium, together with Brandenburg’s Minister of Economics and Energy, Albrecht Gerber, gave the starting signal for the volumetric studio in Potsdam-Babelsberg on Monday. Actress Emilia Schüle was the first person to be recorded by cameras from all sides in the Volucap studio so that she could later be digitally staged.

The studio is located on 170 square meters in the fx.center on the grounds of Studio Babelsberg and is equipped with 32 cameras, which are installed all around on a nearly 4 meter high light rotunda. People and objects can be scanned three-dimensionally and lifelike in the room. The corresponding basic technology was specially developed by Fraunhofer Heinrich Hertz Institute. The previous prototype of the volumetric video studio is for laboratory use only and has been in operation there since October 2017. The installed software “3D Human Body Reconstruction” does not create digital avatars, but creates hologram-like representations of real people that can be processed like computer-generated models. The actors recorded in this way can be placed in real and virtual worlds. It is also possible for spectators to enter the worlds with the help of VR technology and view the events and the person photographed or the object photographed from every possible angle.

It is not only in the film industry that completely new possibilities for narrative forms towards “walk-in film” arise. As the first commercially used studio on the European mainland, the new technology can also be used for professional commissioned productions in many areas of media beyond entertainment such as in medicine, automotive or the games industry. Compared to the existing solutions, including studios in London and San Francisco, Volucap is pursuing a new concept that is future-oriented towards an even higher quality and will also be used for cinema productions in the long term.

Albrecht Gerber, Minister of Economics and Energy – State of Brandenburg

“The volumetric studio is a great showcase. It has enormous economic potential for Potsdam and Brandenburg. And – and this is particularly important to me – this technology can be used far beyond the media industry, for example in the healthcare and automotive industries. That is why the Ministry of Economic Affairs is supporting this project with around two million euros. Babelsberg is not only a traditional film location, but also a place of technological innovation in the media sector. This is why the Federal Ministry of Economics and Technology has named the media city one of twelve “digital hubs” in 2017 – as the only hub for media technologies in Germany.

“For us, this is a decisive step into the future of film. This studio technology provides the basis for narrative forms that can revolutionize cinema and the entire media production in a few years. What is special about the Volucap here is the high-quality technology, the specially developed calculation basis of the Fraunhofer HHI program and the immediate proximity to the studio, which embeds the Volucap in the entire highly professional competence from film technical and narrative infrastructure”.

“For the Fraunhofer HHI it is an important step that our technology, which we have been researching and developing for years, is now not only used for test productions in our own laboratory system, but is now also used for commercial productions in a professional environment.

“We are delighted to be able to make history again in the world’s oldest film studio and produce high-quality walk-in films for the first time on the European continent. Computers and entertainment are increasingly moving away from screens and screens. We now bring the technology to create content that digitally enriches our reality.”

“For ARRI, investing in Volucap is an investment in the (virtual) future. With the lighting equipment of the studio, ARRI is already making a significant contribution to the studio’s performance. In the field of post-production services, the proximity to Volucap enables the consistent implementation of demanding VR and AR projects for film and industrial customers. And for the Camera division Volucap provides the application scenarios and important impulses for further optimization of the recording technology. We wish the management of Volucap much success and skill in the implementation of this ambitious and forward-looking project”.

Carl L. Woebcken, Chairman of the Board, Studio Babelsberg AG

“Unlike computer-generated characters, actors can emotionally articulate and physically depict the actions described in the script. They enrich history by bringing in the human element and thus bridging the gap between fiction and reality. Actors live the action organically and can be viewed by the viewer from all sides. This emotionality has corresponded to UFA’s creative DNA for over 100 years. I am very pleased that it is now possible to incorporate this indispensable aspect into innovative VR/AR UFA projects”.

On June 12, the Volucap will be opened to the public on the occasion of the medientreff.

The project is funded by the Ministry of Economics and Energy of the State of Brandenburg.

Link to the Volucap Trailer: https://www.youtube.com/watch?v=Y1JrCMx3wyE

About the MediaTech Hub Potsdam

The MediaTech Hub Potsdam is both a physical location and a network of companies, start-ups, investors, institutions, universities and research institutes from the core industries of media technology, film, virtual reality, digital engineering, edutainment, data visualization, gamification and interface industries. The open community is for those who are committed and networked. The aim is to promote interdisciplinary cooperation and networking at the location and to present the digital flagship projects of Future Media Technologies. The MediaTech Hub Potsdam was selected in April 2017 by the Federal Ministry of Economics and Energy, BMWi, as one of twelve Germany-wide digital hubs. www.mediatechhub-potsdam.de