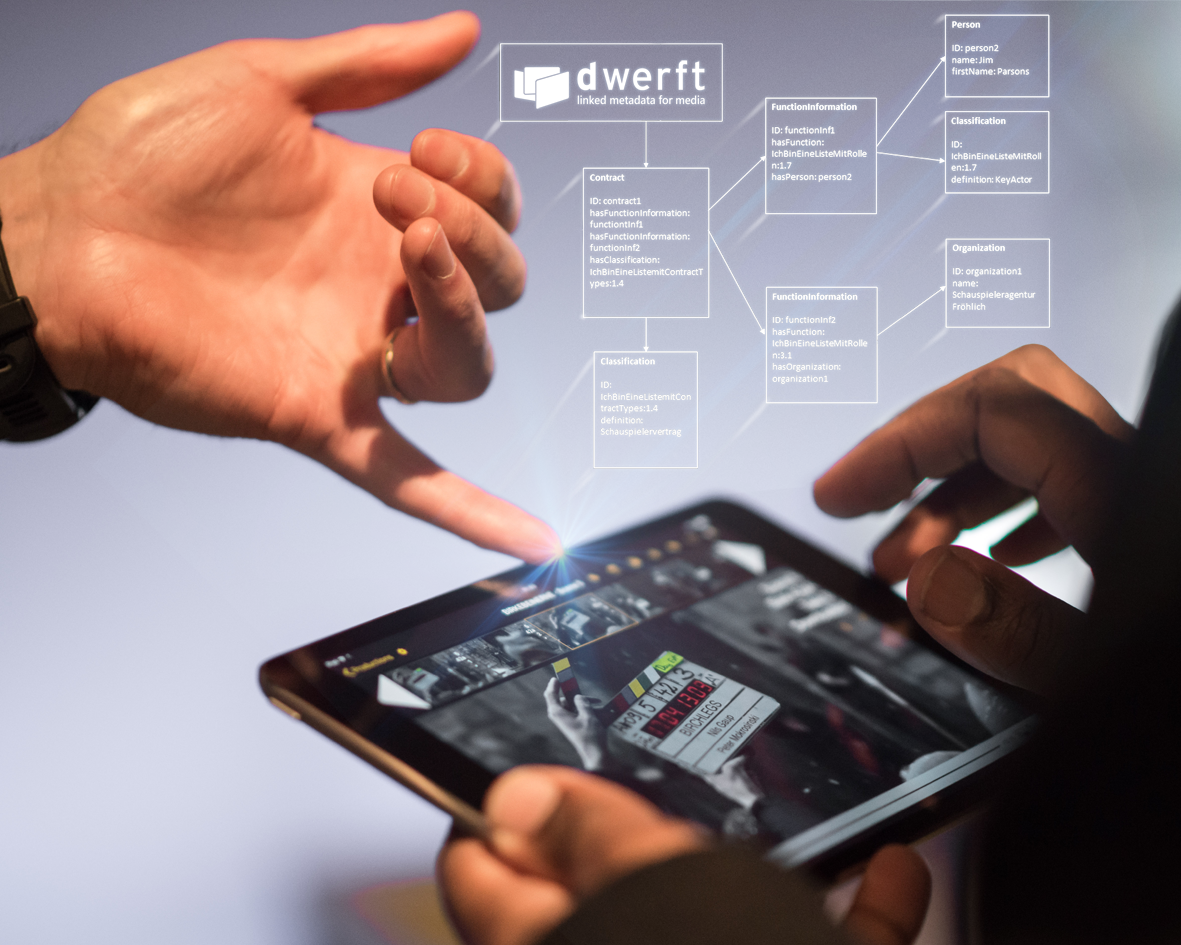 Dwerft: have you ever heard this term before? Dwerft is the name of a recently launched research project in Potsdam-Babelsberg. Dwerft doesn’t come from dwarf. That would be completely inappropriate. Rather, dwerft is a so-called portmanteau word from “digital” and “shipyard”. Thus, Dwerft is operating digital boat building in the figurative sense. Nine million Euros are being channeled into the project. Nearly four million of this comes from the Federal Ministry of Education and Research, with the largest share coming from the partner companies themselves. What is at stake is nothing less than fundamental solutions for the film industry. As is generally known, the sector is in the middle of a transition to the digital world.

The red, green and blue in the dwerft logo represent screens. They represent three central areas of the media industry: production, distribution and archive. The subtitle “linked metadata for media” shows the alliance’s vision: to network metadata in the value chain in order to then play digital film out on all kinds of platforms. The term “media” was chosen because moving images now also play a major role in the fields of print and radio.

The question that the partner companies of the research project in Potsdam are currently intensively considering: how can digital film data best be made available for use and exploitation? Or more concretely: how can this data be stored without loss and how can the metadata be semantically linked within a database? So, it is a matter of linking production, postproduction, distribution and archiving up together. Among other things, films should then be able to be transferred directly to the various distribution platforms such as Netflix or Amazon Prime with the necessary data requirements.
In Potsdam, research is currently being conducted in six areas: algorithms and artificial intelligence for image and speech recognition, block chains for billing systems, file-based media cloud workflows, automated subtitling for cross-media distribution, applications for non-fiction productions and, last but not least, intelligent interfaces to external archives and editorial databases.

By the way, the name of dwerft isn’t that new. An initial project of the same name had already existed between 2014 and 2017 with 10 partners coming from industry and science. In this first stage, the focus had been, inter alia, on research into the copyright framework for the further use of cinematic works, new business models for the production of online video, and on support for the development of business models for aggregated metadata management. The project has now entered into its second round – now located in Potsdam-Babelsberg – as part of the MediaTech Hub Potsdam.
Research results are expected in 2021. That means we will have to wait a little longer. But it is already clear that they will have a relevance far beyond the film industry. Anyone who has to deal with large amounts of data and isolated solutions can benefit from this.