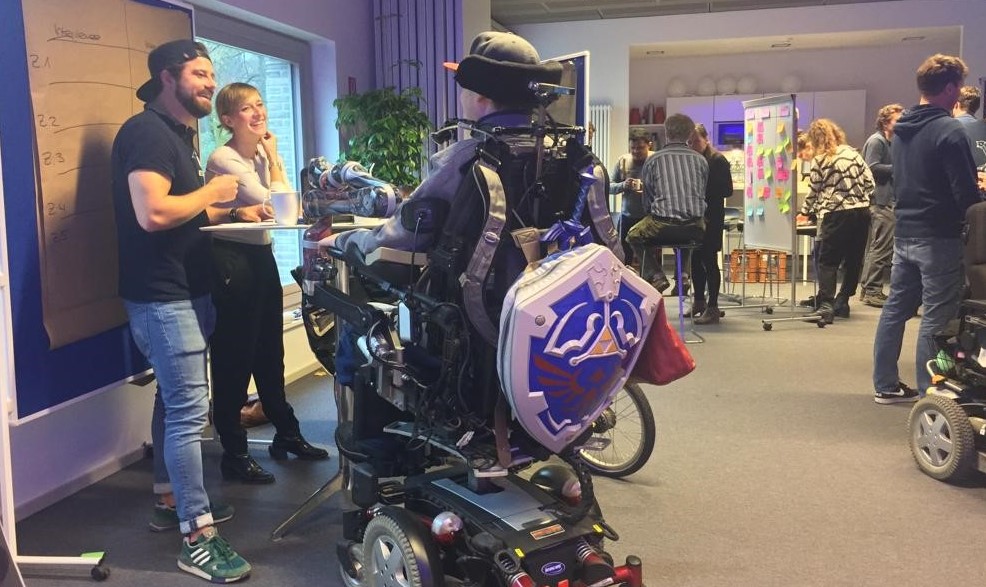 Gaming can promote the social, equal participation of people with various disabilities and help overcome the obstacles to making contact. But how? This was the subject of the “INCLUSIVE GAMING” Innovation Day on 18 November, 2019 ahead of the MediaTech Hub Conference in Potsdam. Together with the Digital Health Hub in Nuremberg-Erlangen, BIRNE7 e.V. and in cooperation with the Medical Valley EMN and the HPI School of Design Thinking (Potsdam), Design Thinking was used to develop ideas and concepts of how people with a wide variety of disabilities can get better access to gaming. Not an insignificant task, given that gaming is now considered a cultural asset. 15% of the world’s population experience some form of disability. The UN Convention on the Rights of Persons with Disabilities (CRPD) advocates the full integration of these people into society – a social challenge.

About 40 people with and without disabilities were invited. Four teams were established. Each team was mentored by two Design Thinking Coaches. The teams had five experts that could consult, two blind people and three in wheelchairs, one of them being paraplegic from the neck down. Some of them had travelled from afar to be there.

One team used the Design Thinking method to explore concepts in order to achieve better a pre-configuration of games for paraplegic people via the mouth-operated QuadStick controller, since the “software” for creating game profiles (Google spreadsheets) isn’t intelligent at the moment, and, to some extent, it’s very time-consuming trying to adjust the QuadStick to work with a new game. One of the team members was Dennis Winkens from Viersen, near Mönchengladbach, a passionate gamer, who founded the self-proclaimed inclusive WheelyWorld gaming “crew”, plays with his mouth and was able to report from practical experience about the obstacles he has faced. “Basically, everything is possible,” he said. “But the more input you need and the faster the game gets, the more difficult it then gets for me.”

A second team was looking for solutions to see how gaming can bring people with disabilities together with able-bodied people. A third group dealt with the question of how people in wheelchairs and visually impaired people can have better chances of participating in Virtual Reality (VR), and how vibration, for example, could be used. This would also interest Dennis Winkens.

The fourth group focused on the special game format of Treasure Hunt and the question of how people with disabilities can be more involved in the online game – i.e. how one can develop an adapted and thus well-balanced module according to the specific disability and plug it into a standardised interface. “The game could then be launched and played around the world with all sorts of different people without and with the most diverse of restrictions.” And: “You are steering someone through the Niagara Falls. The blind person pays more attention to sounds and offers tips on “hidden sounds” via the voice control module, someone else sees something ‘flashing’ and clicks on it, etc. … A game like that can be played together, globally and with everyone as ‘an equal among equals’,” says Bahaddin Batmaz, IT expert from Marburg, who is blind himself, studied Computer Science, programmes professionally, deals with the usability of web pages, consults and trains in inclusive media, content and working techniques, i.e. he is a professional. There was a central issue in all of the four groups: accessibility.

The workshop day was short, but the participants were all in agreement that it was an important step in the right direction. “Some good ideas were developed in the short time available,” Dennis Winkens stresses. “That’s something you can give programmers to work on.”

Bahaddin Batmaz just thinks it’s a pity “that there weren’t any gaming start-ups there this time round. It would have been nice to get some networking from start-ups. But there were many interested people to meet from the fields of telecommunications, radio, film and television. Everyone took something away from the event!” “Many of the participants had never been involved in inclusive gaming before,” adds Dennis Winkens. And Jonas Jung from Medical Valley EMN, who also works on a voluntary basis for BIRNE7, stresses: “It was great that we were again able to pay more attention to the subject through this event organised by the MediaTech Hub Potsdam. We want to build on this. We were able to broaden our scope, strengthen awareness. In addition, some participants spoke directly, openly and impartially with gamers with disabilities for the first time. They also all learnt that other approaches are needed with Design Thinking when you are working with people with disabilities so as to